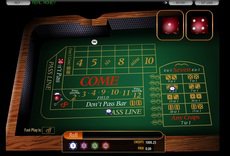 If you've ever seen it in a land-based casino, then you likely know that craps is a fast-paced game that involves a pair of dice and a ton of excited people. Because if the excitement and all of the lingo that is being used, it might seem like a daunting task to learn how to play craps but this isn't the case at all. Here at Buzzluck Casino , you can play to your heart's desire via the internet in the quiet comfort of your own home. Essentially, it involves two dice and the prediction of the outcome of any given roll. The person throwing the dice is known as the 'shooter' and there can be up to 10 people placing wagers on his or her outcome, though this isn't the case in an online setting as you'll play independently.

There are two initial wagers that you'll want to stick with as you are learning how to play craps: the Pass Line and the Don't Pass Line. In the former, you are wagering that the shooter is going to throw a seven prior to a two, three, 11 or 12 in order to win. If a seven is thrown, then, you win. However, if a two, three, 11 or 12 shows, you'll lose. The latter option, then, is the exact opposite of this: you'll be wagering that the two, three, 11 or 12 will come up before a seven. If none of these numbers is tossed and the shooter's outcome is four, five, six, eight, nine or 10, then this will become the point. The goal at this point is to roll the point again prior to getting a seven.

Of course, here at Buzzluck, we make it possible for US casino players to place all types of bets on these outcomes. For instance, you might choose to bet that the shooter will get a "hardway" roll. This simply means that the result will be a two, four, six, eight or 10 will be thrown but that both dice will be of the same value. There are also prop, place, field and odds bets that can mix things up a bit and provide you with new ways to win.